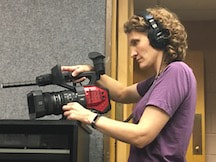 Julie Casper Roth (director, producer)
Julie is an award-winning filmmaker interested in hidden histories, the unseen, and the ignored. Her documentary and experimental work has been screened nationally and internationally at venues including Baekam Art Hall in South Korea, the Athens International Film and Video Festival, Chicago Reeling LGBTQ Film Festival, SCOPE Basel, the Paris International Lesbian and Feminist Film Festival, Anthology Film Archives, and many others. She is a two-time finalist for the Sundance Screenwriters Lab, the recipient of a NYSCA Individual Artist grant, the recipient of the New York Foundation for the Arts (NYFA) Fellowship in Video, and a recipient of the College Art Association Professional Development Fellowship. Julie attended Smith College and received her MFA from the University at Albany. She has taught documentary production at the University at Albany and Skidmore College. Learn more by visiting her website.

Joy E. Reed (editor)
Joy brings over a decade of experience in documentary as an editor, associate editor, and animator, and has been on the creative team of a number of films that have premiered at Sundance, including BUCK (Audience Award 2011), HOW TO DANCE IN OHIO, and most recently, THIS IS HOME (Audience award 2018).  Joy is a principal of Oh, MY! Productions®, and their work has been broadcast on PBS, HBO, and other festivals worldwide. Joy is drawn to character driven documentaries in which, by showing the day to day experiences of people that might otherwise be “othered,” through skillful editing, connections may be drawn and relatability with a wider world can be achieved. To see a full list of their credits, visit www.imdb.com/name/nm2328199. 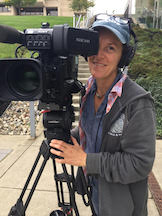 Jill Malouf (principal camera)
Jill has been a freelance videographer, filmmaker, and editor for over 19 years. She has worked on numerous projects from documentaries to commercials to web series for the Public Broadcasting System, NBC Sports, and The Nature Conservancy as a cameraperson, assistant cameraperson, gaffer, and/or editor. She is based in Albany, NY and is a Certified Woman Owned Business under the New York State Minority and Women-Owned Business Enterprise program. 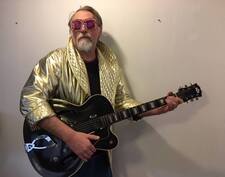 Bill Brovold (music composer)
Bill Brovold is a painter, composer, and artist. In the early 1980s, he was a member of a number of New York avant-garde, No Wave groups including Rhys Chatham Ensemble, East Village Orchestra, Fast Forward, and the Zen Vikings. Bill created the Detroit bands Larval and Strange Farm, whose revolving line-ups at the time included Billy Ficca of Television, Ernie Brooks of Modern Lovers, and Ron Asheton of The Stooges. Brovold's long musical history overflows with interesting projects and obscure yet essential names in the worlds of art and avant-garde music. When he's not playing music, building instruments, or making sculpture, Bill teaches art and improvisational music to children in Brooklyn's public schools. His studio is in New York's Hudson Valley.